Today at the Madelyn Helling Library in Nevada City, we celebrated the Grand Opening of the Marian E. Gallaher M.D. Amphitheater designed by Siteline Architecture. 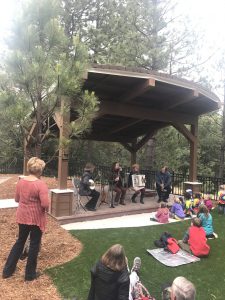 The event was  held from 11:00 AM until noon in the outdoor amphitheater at the Madelyn Helling Library at 980 Helling Way in Nevada City.

The ribbon cutting took place at 11:00 AM followed by a dedication from amphitheater benefactor, Jackie Wilson. Attendees were treated to the summer’s first Musical Mondays at Madelyn’s concert featuring Beaucoup Chapeaux, courtesy of InConcert Sierra. Light refreshments were provided by the Friends of the Nevada County Libraries.

An ancient shape, a partial bowl to hold

the sound of words and notes a moment

before releasing them past attending ears

into a wider circle of pines and oaks

and cedars, sound borne on the wind,

over Hirschman’s Pond, the hills: Cement

and Wet, the little mountains: Round and Banner,

and then higher into Sierra crags and the flyway

traced by Sandhill Cranes yet at the same time

and mining shafts where history’s buried

next to luck, the song now echoing so faintly only

the earth’s bones and the closest stars can hear it.

Find us on Houzz